Enter your City name or Pincode

Nurmahal also spelled as Noor Mahal is a historical town in Jalandhar district of Punjab. The city is said to be established by Jahangir, son and successor ofd Mughal of Emperor Akbar. The historical significance of this place is the Serai Nurmahal, a historical monument situated in the city. Even today the town is known as Saria. Nurmahal is situated on old Grant Trunk road, which connects Pashwar to Culcutta. This road was built by Sher Shah Suri. 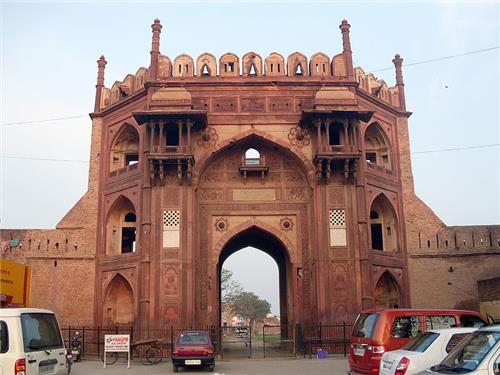 Nurmahal is a historically significant town built by Jahangir. As Noor Jahan, the wife of Mughal Emperor Jahangir, was brought up here, the town was named after her. She is thought to have spent her childhood here. Later Nurmahal came under the rule of Talwan Rajpurts and Ranghars. Dewan Moti Ram Khosla moved to Nurmahal from Rahon for better prospects. These Khoslas at Nurmahal, who were called as Rahon’s Khoslas, lived in a street named Mishra Mohalla. The lived in big houses called Havelis, which were made of small bricks and were with very wide brick walls, high ceilings and very small rooms. As Nurmahal was an agriculture based town, Dewan Moti and his future generation became prosperous. They engaged in agriculture related business like manufacture of brown sugar. Many Khoslas became money lenders. A Khosla was the first president of Nurmahal municiple committee. Later, Mela Ram Khosla, son of Prithi Ram became the president of Nurmahal municipal committee for several years. Sahela Ram Khosla, son of Salig Ram helped to begin a Doaba Ara High School in the town. Basant Rai, son of Mohkam Chand constructed a Hindu temple, which exists even today and is still worshiped.

However, the government later established corporative banks to discourage the practice of money lending. As a result, many Khoslas shifted to other places in search of livelihood in the beginning of nineteenth century. Most of the havelis at Nurmahal became empty. By 1994, only a few Khoslas families left in Nurmahal and most of them are engaged in their own business or agriculture. After independence, the Muslims, who were half of the population of Nurmahals before partition, shifted to Pakistan and they were replaced by Aroras.

Nurmahal is located at 31.0964°N 75.5967°E with an average elevation of 224 m. This small town is situated near the Lohian Khas-Nakodar – Kudhiana line in Punjab. Nurmahal is also connected with other nearby town named Philaurand Nakodar by a road that goes side by side with the railway lines. The city is located at a distance of 13 km from Nakodar and 33 km from Jalandhar. Surrounded by Nakodar Tehsil towards west, Philaur Tehsil towards east, Sidhwan Bet Tehsil towards south and Rurka Kalan Tehsil towards east, Nurmahal shares its boarders with Ludhiana district and Jalandhar district. Jandiala, Philaur, Nakodar and Phagware are the nearby cities to Nurmahal. The villages near to the city include Natt, Dalla, Chuheki, Cheema Khurd and Sanghe Khalsa.

Nurmahal is a municipal council in Jalandhar district of Punjab and it is divided in to 13 wards. All the basic facilities like water, electricity and sewerage are provided to the people by the municipal council. As per the Cenusu India released in 2011, Nurmahal municipal council consists of total 14, 560 people in which 7, 540 are males and 7, 020 are females. Children with age of 0-6 constitue 10.93% of total population and it is around 1592 in digits. The female sex ratio of Nurmahal city is 931 against state average of 895. The city has an average literacy rate of 81.29%, which is higher than 75.84%, the state average. Nurmahal also has 84.12% male literacy and 87.26% female literacy.

Nurmahal has great tradition and culture that attract numerous travellers to this small town. The ancient and historical monument called Serai Nurmahal, which is the fine example of Mughal architecture, is the prime tourist attraction in Nurmahal. Star hotels and restaurants are difficult to find out this small town. However, there are a few good eateries in Nurmahal, which serves delicious Punjabi cuisines of unique flavor. As Jalandhar is only around 30 km away from the city, people, who plan to visit Nurmahal, prefer to stay in the hotels of Jalandhar.

Even though Nurmahal is a popular tourist location in Punjab with its historical monuments and other features, the city is still in developing stage. The people here mainly depend on agriculture and so the modern services providers like packers and movers, event management companies, real estate agents etc are very few here. However, the important utilities and services like post office, bank branches, aadhar card centers etc are functioning in Nurmahal. Some of the basic services like courier services, petrol pumps, catering services etc. are listed here.

Nurmahal, one of the ancient cities of great historical importance, is a must visited place in the state of Punjab. It is sure that the historical monuments and the geographical peculiarities of this town show you a clear picture of the rich tradition and culture of Punjab.


Nurmahal at a glance

Comments / Discussion Board - About Nurmahal